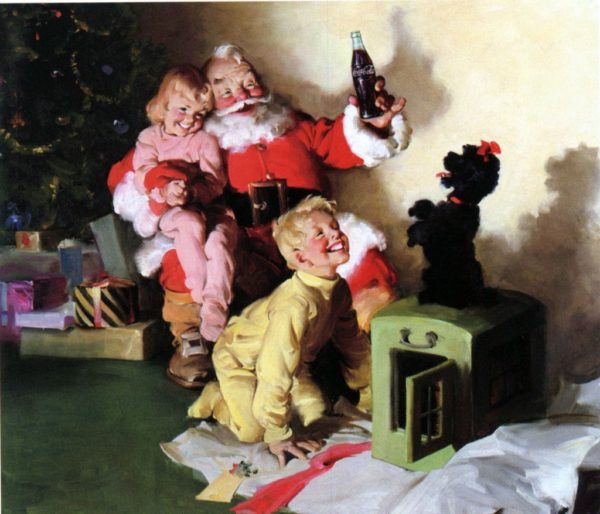 Christmas is, without question, the most celebrated holiday of the year. With brightly lit Christmas trees joyously placed inside our homes, streams of lights decorating our yards,  festive holiday music played in every store encouraging hordes of shoppers hoping to catch the latest sale, and of course jolly Saint Nick and all his flying reindeer smiling joyously everywhere you go, who wouldn’t enjoy this holiday? After all, could there be any better way to celebrate the birth of the Savior of the world?

But many of us might be surprised to discover that Jesus was not born on December 25th. No one actually knows when Jesus was born and the Bible never provides a specific date. Interestingly, early Christians did not associate December with Jesus’ birthday, but rather they emphasized his birth in the spring. In Egypt around the year 200 AD, Christians celebrated Jesus’ birth on May 20th while a third century Roman calendar of feasts called the De Pascha Computus declared March 28th as the date of Jesus' birth. 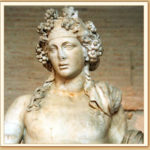 But December 25th had a greater meaning to the Pagan world: It was the birthday of several gods including the Roman Dionysus and the Egyptian Horus. Among the Romans of the third century, December 25th was Dies Natalis Solis Invicti, the festival of the Sun god, celebrating the god’s rebirth. The festival of the Sun god was a man-made holiday actually celebrating the birth of several different sun deities: Including the Syrian sun god; Sol, the Roman sun god; and the Persian god Mithras. Also, fittingly, it was the day the Winter Solstice was celebrated.

The festival of the Sun was first introduced as an empire-wide holiday in the early third century and gained widespread popularity by the middle of that same century. 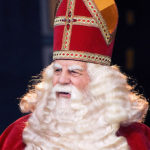 But not all Christian leaders supported the holiday. In the third century the Apostolic Father Origen condemned the celebration of birthdays – any birthdays – as arrogant and self-promoting. And, in the fourth century some Christian writers scoffed at the idea of celebrating the birthday of Gods. Clearly the celebration of December 25th as a Christian holiday and the birth of Jesus was not universally believed or celebrated.

Christmas was heavily promoted during the revival of Catholicism during the late fourth century and it slowly merged with numerous other cultures. Popular elements such as festive lights and the use of green trees and plants came from the Roman New Year celebrations. The tradition of gift giving was a left over from the traditions of Saturnalia while various elements of the feasts came from German origins (the Yule was a Pagan Scandinavian winter festival which later became synonymous with Christmas). 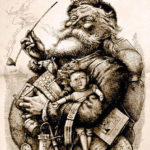 So what does the universally recognized figure of Santa Claus have to do with Jesus and Christmas? Santa Claus is none other than the figure of jolly old Saint Nicholas, a fourth century bishop well known for his gifts to the poor. Saint Nicholas was later canonized (deemed to be divine and thus worthy of veneration). The plump, happy, red-suit wearing figure we are so accustomed to these days was created by a cartoonist in the early nineteenth century and popularized through many publications. 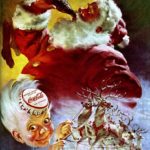 But it was Coca-Cola’s 1930’s ad campaign featuring the eternally cheerful gift-giver that would cement Santa Claus’ image in the modern eye. In fact, there has been much speculation that Santa was a creation of Coca-Cola because he so innocently sports their colors of red and white. But in reality, Santa had been featured in his popular red and white outfit by several other beverage companies prior to Coca-Cola. It was simply the latter that solidified the now popular image in the public’s eye.

And what of the image of reindeer flying through the sky? Medieval Germanic legends tell of the god Odin, with his long white billowing beard, riding a magical flying horse through the sky during the Yule holiday. Children would place their boots near the chimney filled with straw and food for the horse to eat. Odin would then reward those children by replacing the food with toys and candy. The practice continues to this day, but with the Christianization of these countries, the tradition of Yule shifted to a celebration of Jesus’ birth and Odin morphed into Saint Nick. 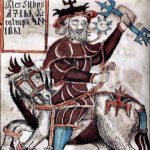 Even in America, it is tradition to leave a plate of cookies and a glass of milk out for Santa, after all, flying around the world in one night and jumping through all those chimneys must be hard work, even with all his new found magical powers and mythical helpers.

It is also worthwhile to note that Christmas was not always accepted by modern Christians. In the 17th century Puritans banned the holiday in both Europe and America, believing it to be a Pagan tradition with no basis in the Bible. And they were right. The European ban lasted almost two centuries, but in the end, society was to have its fun and the ban was rescinded. In America, the ban on Christmas only lasted twenty-two years.

Apparently, in America extremists beliefs can’t get in the way of a good celebration for long. Interestingly, some Christian groups such as the Jehovah’s Witnesses refuse to practice Christmas while the Latter-day Saints celebrate Christmas but believe Jesus to have actually been born on April 6th.

Still today there is controversy surrounding the celebration of Christmas. Christians are often up in arms emphasizing that the holiday should be a public celebration of the Savior’s birth while secularists are trying to take such blatantly religious ideas out of the public arena, preferring to emphasize the festive season and the all-around general theme of goodwill.

Ironically, and possibly unbeknownst to the secularist, both groups are essentially promoting a religious, and specifically pagan, holiday: Whether in the form of the birth/rebirth of the Savior/sun god, the winter solstice or the Yule festival.

Continue the series with THE IMMACULATE CONCEPTION or read other articles on the evolution of Christian traditions.