Halloween is, without a doubt, my favorite holiday. Bonfires, hay rides, haunted houses, scary stories, horror movies, and kids dressing up like their favorite monster or hero. And lets not forget all that gloriously-wonderful, tooth decaying candy. I actually spend months planning my yard decorations and every spooky detail of my costume for those three hours spent sitting on my porch scaring innocent kids and handing out gobs of candy. But where did this largely secular holiday, with its emphasis on imaginary spooks, come from, and does it have anything to do with Christianity. Well, in fact, it has a great deal to do with Christianity. 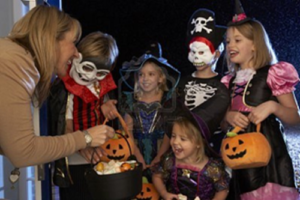 Halloween is an ancient holiday known as All Hallows’ Eve, which over time was shortened to Hallowe’en and then to our modern Halloween. The word “eve” is an Old English abbreviation for evening and “hallow” refers to something that is holy. In this instance it refers specifically to the saints. In other words, it is sometimes rendered as “All Saints’ evening.”

Celebrated on October 31st, All Saints’ Evening preceded All Hallows’ Day, also known as All Saints’ Day. This was the day to celebrate all the righteous people, holy saints, who were granted reprieve from the after life and allowed into heaven.

But, before it became All Saints’ Day, November 1st was a day of pagan religious celebration originating with the Celtic festival, Samhain (pronounced Sah-wen), which celebrated the end of the harvest season. This was a time of death for the Celtic people as the summer came to an end and the winter season began. Food stores that would sustain the people throughout the harsh winter were gathered and livestock was slaughtered.

It was believed that on the night before Samhain the boundary between the living and the dead was dissolved, allowing the spirits of the otherworld access to our own. These often malicious spirits, in conjunction with other non-friendly beings such as the fae, could harm the living through sickness and disaster, or more commonly through playing mal-intentioned tricks. 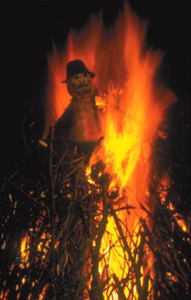 To ward off the spirits of the dead and other-worldly creatures, a great feast was held, known as the “festival of the dead” (Oidhche Shamhna in Gaelic). Large bonfires were built to consume the remnants of the slaughtered animals. Additionally, young men wore costumes or masks or painted their faces in order to either scare away or placate the spirits.

However, the spirits of their ancestors were honored during this feast. A place would be set at the table specifically for a family’s dead ancestors and they would tell tales of those ancestors’ exploits by the light of the bonfire. This custom is still observed by Celtic descents.

Many of the ancient Irish tales featured references to Samhain, with the hero often beginning his adventures on the night of the feast. For example, The Adventures of Nera (Echtra Nerai) featured spirits, demons and the sídhe (the world of faerie).

In the eighth century, the Pope changed the Christian holiday of All Saints’ Day, traditionally celebrated on May 13th, to correspond with Samhain on November 1. The Romans found Samhain to be very similar to their own feast of the dead, the Lemuria. November 1st became All Hallows’ Day, celebrating the Saints who had died and were admitted to heaven, and November 2nd became All Souls’ Day, celebrating the faithful departed but who had not yet gained entrance to heaven.

October 31st then became All Hallows Eve, which retained a great deal of Celtic traditions relating to spirits and other-worldly creatures.

All Hallow’s Day was widely celebrated in the western world by the ninth century A.D., and received official ecclesiastical confirmation during the fifteenth century under Pope Sixtus IV. But, it was the pagan traditions of All Hallow’s Eve that won the attention of the Western world in the centuries to follow. 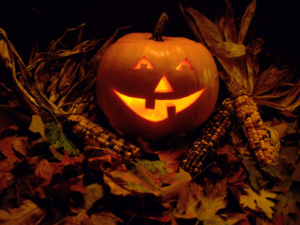 The ancient Celts would often place a skeleton in a visible area on their property in honor of the dead and make lanterns out of turnips or other large vegetables by carving faces into them and then placing a candle inside. It was believed this illuminated embodiment of the dead would frighten away evil – similar to the use of Gargoyles on the fronts of Cathedral during the Middle Ages. In North America, pumpkins, which were more accessible and easier to carve then the much smaller turnips, were more popular to use and became the now familiar Jack-o-lantern, though it was not singularly associated with Halloween until the mid-nineteen century.

In addition, because the barrier between the world of the living and the dead was believed to be so thin during this day, divination (consorting with the spirits to learn about the future) became a common practice in many rural areas. Chasing crows, dropping eggs into water, and other rituals gave rise to erroneous accusations of witchcraft and devil worship (we find a great example of this in the literary classic The Crucible).

Medieval demonology of the fourteenth, fifteenth and sixteenth centuries fed the western world’s belief that legions of demons infested the world, roaming the streets seeking to destroy the souls of men. This tradition mirrored ancient Celtic beliefs and helped imbue Halloween with a particularly sinister association – one symbolically manifested every Halloween as children dressed up as monsters and roamed the streets seeking sweets or threatening tricks. But, as a result of the Enlightenment period, such sinister superstitions gradually lost hold in the public’s mind.

Though strong elements of Celtic tradition remain today, modern Halloween tradition is mostly a conglomeration of popular and generally fictitious literature, mainly of the Gothic and horror genre. Frankenstein, Dracula, the werewolf and Jekyll & Hyde merged with embellished stories of witches, mummies, ghouls, faeries, demons and the devil himself, resulting in a popular, and largely commercial, holiday. 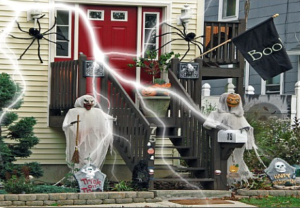 Interestingly, Halloween is still centered on the theme of death. Homes are still decorated with skeletons – usually plastic – but now accompanied by a whole host of fear inspiring creatures, beasts and tombstones installed for the purpose of scaring children in a good natured way rather than as protection from evil.

Ghosts and hauntings still captivate the curiosity of the masses but a century of filmmakers have turned our attention away from warding off spirits of the dead and the wicked interest of the Fae, and turned it, perhaps appropriately, toward the threat of the very real maniacal imaginations of man.

Although Halloween is not a sanctioned Christian holiday, it was historically an important part of the sacred All Saints’ Day. The fact that it has now eclipsed All Saints’ Day in the minds’ of the masses speaks volumes about our religious heritage and inclinations.