THE STORIES YOU NEVER LEARNED IN SUNDAY SCHOOL... 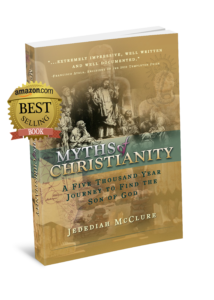 Millions of readers worldwide were shocked by the controversial claims of novels like the Da Vinci Code and Zealot. Now, this entertaining, thought-provoking and meticulously researched narrative uncovers the origins of long-held Christian traditions.

Two thousand five hundred years ago - more than two centuries has passed since Jerusalem was sacked and the temple destroyed by the Babylonians. The mighty nation of Israel is shattered and the Jewish people scattered across the continent. Now under Persian rule, Ezra, the "Father of Judaism," leads the Jews back to their homeland to rebuild Jerusalem and the holy temple. But unlike Moses, Ezra is not acting under divine, prophetic authority - Ezra was sent by the King of Persia to teach the Israelites the laws of God; not the Hebrew laws of old, but the laws of the Persian religion of Zoroastrianism.

Ezra's "reformed" teachings on God, the Devil, angels, resurrection and the coming of an apocalyptic savior would forever change Jewish tradition and create a cultural expectation that would eventually shape the legendary status of a lowly carpenter and forever alter how the west would see the world.

In clear, straightforward terms, Jedediah McClure sifts through centuries of myths and traditions and assembles extensively researched scholarship into an engaging and relatable account of Christianity’s origins. McClure examines the development of core Christian doctrines through the lens of the chaotic era in which this religion took root: an era dominated by foreign occupation and pagan influence, overshadowed by the destruction of Jerusalem - and with it Jewish nationalism - and inundated in apocalyptic fanaticism. Countless prophets, preachers and charlatans alike trekked across the empire performing "miracles" and spreading their own versions of the Word of God. This was an age of confusion and competition - where rival Christian leaders competed with each other for followers; where access to authentic "gospel" texts were in limited supply while countless contradictory "gospels" vied for legitimacy; and where long-standing local traditions from region to region altered the manner in which Christianity was practiced.

Both devout and subversive in the best sense, Myths of Christianity provides a fresh, non-divisive perspective on the origins of the world's largest religion even as it affirms the transformative power of Christian principles. The result is a thought-provoking, elegantly written narrative that makes complex, intertwined, and nuanced historical, cultural, and religious paradigms understandable, enlightening and even fun and entertaining.

Please take a moment and preview the first chapter by clicking on the purple box below.

"I found it extremely interesting and I learned quite a bit from it...the book is extremely impressive, well written and well documented."

"The Myths of Christianity by Jedediah McClure is well written, entertaining, and insightful...this book is MUST READING in this age of religious intolerance."

"Very Interesting! The author is knowledgeable and presents important historical information about the greatest religion in the world...highly recommended for all believers and non-believers who thirst for knowledge."